Showing posts from July, 2009
Show all

July 18, 2009
Right now I'm still doing research on the question of whether God has "middle knowledge," and what it means to man's freedom vs. God's decree.  I found a great series of posts by TurretinFan I plan to include somewhere in the research paper, and I wanted to share them here.  Each post is accompanied by a video with helpful discussion.  And, if I may say this, TurretinFan is quite the looker. Part 1 Part 2 Part 3 Part 4 Part 5 Part 6
Click to read more... 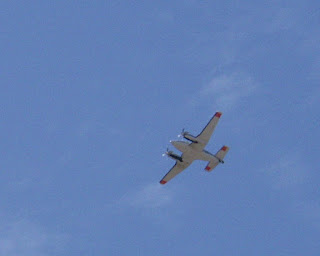 We couldn't get close enough to see pictures of flames, but here are plenty of aerial action. Here is a shot of the helicopters reloading over Castaic Lake. Fire #1: Fire #2 (started by a bus fire ): Couple more helicopter shots: Firetrucks gather near our home for staging: Northbound I-5 at a standstill. Doin' its thang: And getting more water:
Click to read more...

On Sunday, I had the opportunity to begin teaching the lesson on salvation from the course "Fundamentals of the Faith" provided by Grace Community Church . This should only be a two-parter, depending upon how long-winded I become. Here is the outline: I. INTRODUCTION The debate on these issues has carried on since the time of the Apostles. This is because Scripture seems to both affirm God's sovereignty and man's responsibility in salvation, creating tension. Hopefully, this lesson will help you have a better grasp of the issues involved in order to bring you more reason to rejoice in your salvation. A. God’s indictment of man According to Romans 3:10–12, what are six things man is guilty of? None righteous Isaiah 64:6 (filthy garments) None who understands Ephesians 4:17,18 (understanding darkened) None who seeks God All have turned aside Isaiah 53:6 (all turn own way) Useless Titus 1:6 (worthless deeds) None who does good B. The fallen nature of
Click to read more...

Spurgeon: Keep to the Old Truth

Phil Johnson posted this nugget from C.H. Spurgeon: ___________________________________________ Your weekly dose of Spurgeon posted by Phil Johnson The Pyro Maniacs devote some space each weekend to highlights from The Spurgeon Archive. This short but potent excerpt comes from "Additions to the Church,"a sermon preached Sunday morning 5 April 1874, at the Metropolitan Tabernacle. ear brethren and sisters, never give up the grand old truths of the gospel. Let no excitement, even though it be the whirlwind of a revival, ever sweep you off your feet concerning the great doctrines of the cross. If God does not save men by truth he certainly will not save them by lies, and if the old gospel is not competent to work a revival, then we will do without the revival; we will keep to the old truth, anyhow, come what may! Our flag is nailed to the mast.
Click to read more...

Asking a question is out of the question

July 03, 2009
Security hassles a few Christians that ask a question at a Muslim booth that invites people to ask questions. Hmmm. (HT: Veritas ) Here is the explanation from Acts 17 Ministries : On June 21st, I moderated a peaceful public debate between Mary Jo Sharp and Ehteshaam Gulam . After the debate, Nabeel, Mary Jo, and I went to the Dearborn Arab Festival, which had already become an open celebration of persecution against Christians. The festival organizers had declared that Christians could not distribute materials on the public sidewalks or street, and, when the matter was brought before the courts, the judge agreed that Christians could not freely distribute information during the festival. (Note: This decision has been defended in the media by claiming that the “no-distributing-materials” rule applied to everyone, and therefore wasn’t unfair to Christians. However, anyone who was at the festival knows that this is not true. People were walking up and down the sidewalks distributin
Click to read more...

July 02, 2009
The Gospel-Driven Blog maintained by John Fonville has moved to his church's website and taken on that namesake. Please add the Paramount Church Blog to your feed reader and be enriched.
Click to read more...

The Marrow of Modern Divinity

July 01, 2009
Phew. My last summer class is finally over. Remind me to stop taking those sixteen-week classes crammed into four weeks. Oye vey. Anywho, I can finally get back to posting regularly. That's more fun anyway, right? It's going to take me about a week to get back up to 100% as I line some things up. I've had a couple of draft posts ready for final revision for a couple of weeks now, and I need to build back up the blog schedule. I also have the pleasure of teaching adult Sunday School for the next couple of weeks, so please be in prayer about that. This week will probably feature brief posts as I catch up on Google Reader. I'll say, "Hey, look at this!" but most of you will already have seen it days ago and roll your eyes. Oh well, humor me. I'm over 5,000 unread items in the hole right now. Speaking of that, did you hear that Micheal Jackson was rushed to the hospital? Stay tuned here for up to the minute coverage, as we hope he pulls
Click to read more...
More posts