Showing posts from September, 2009
Show all

2010 Faculty Lecture Series The series for 2010 will be Biblical Sanctification and its relationship to justification. I'll remind you as we get closer to the date.
Click to read more...

Some of CAVA's choices might be a little girlie

September 25, 2009
We are continuing to blog our homeschooling experience with the unique public-school extension called CAVA.  See previous posts by clicking the CAVA label below. We've been positive in our blogged experience thus far.  Since we've been involved for a few weeks now, I'll take this an opportunity to post a few concerns we have had. On the first or second day, he had to color flowers to help him learn his colors.  We didn't give it much thought at the time, but I remember that we did feel the need to mention that girls would like to receive flowers from Jake.  Hmm.  Well, okay, flowers are a part of nature, and I do hope he learns to appreciate beauty in nature... The first story we were to read Jake was Cinderella.  It's hard to get the boy excited about the pretty dress, the excitement of a ball, and the happily-ever-after with prince charming.  "How did Cinderella feel after receiving the beautiful gown, son?"  "I dunno."  "Well, how wo
Click to read more...

The Dawn Treader is complete The Case Against the R-Rated Church (Interview)

September 24, 2009
The church is selling sex? Is this a passing fad or here to stay? Below is an interview between Phil Johnson and John MacArthur. (HT: Defending. Contending. )
Click to read more...

Deleted Scene from The Matrix: Revolutions

September 23, 2009
From RiffTrax : While we were working on our upcoming RiffTrax for The Matrix: Revolutions, one scene in particular stood out amongst the noise and chaos of the 2-hour-but-seems-like-4 final chapter in the Matrix Trilogy. The scene comes about an hour in, when the subtly named “Bane” sneaks about Neo and Trinity’s ship and takes Trinity hostage. Bane, as you’ll no doubt recall from the mess that was Matrix: Reloaded, has been taken over by Agent Smith. If you don’t recall, this is because the architect talked for about half an hour after this happened and you probably nodded off or ran shrieking out of the emergency exit. Neo apparently can’t piece it together either, and we came up with this deleted scene of their extended conversation:
Click to read more...

Why leaving the church for home groups is attractive

September 21, 2009
Our common desire and need for community. David Clark ( To Know and Love God , Crossway Books, 2003) writes: “ People in some local churches do not experience much true community. Authentic community goes beyond the superficial 'Hello' on Sunday morning. In true community, each person loves and is unconditionally loved. Each one knows others and is authentically known. “ Experiencing community is the felling of finding a social home. This does not require a formal organization. It is more a way of living together ” (247). Yet, the danger is that we cannot substitute “ dominantly horizontal human connections for vertical relationships with God .” Church is not to be a therapeutic culture. While church community “ requires mutuality and service ,” it “ does not entail a complete leveling of all functions and roles. It is possible for leaderless groups to lack community ” and “ well-led groups to experience significant community ” (248).  Let us build genuine commun
Click to read more...

The Future Life and the Psalms

September 17, 2009
The final installment of our adaptations from John Richard Sampey, “Psalms, Book of,” The International Standard Bible Encyclopedia. http://www.studylight.org/enc/isb/view.cgi?number=T7141 Refreshment with the thought of life everlasting (Psa 16:8–11) God’s face after death is better than worldly wealth (Psa 17:13–15) Assurance of a fellowship with God that cannot be broken (Psa 73:23-26) Faith in the future life (Psa 49)
Click to read more...

Gather the dragon balls and make a wish

ABC's from the ESV Bible

September 14, 2009
I've seen these lists for the KJV, but since we all have ESV's, I wanted to make one in that version. The verses are also intended to be discussion starters, of course.  Hopefully, however, no verse requires a long discussion as to its context for the verse.  If you come across a verse in the ESV that you believe would be better for a list like this than the one present, please let me know. A- “all have sinned and fall short of the glory of God” (Rom 3:23) B- “Believe in the Lord Jesus, and you will be saved” (Acts 16:31) C- “Children, obey your parents in the Lord, for this is right.” (Eph 6:1) D- “Depart from me, you evildoers, that I may keep the commandments of my God.” (Psa 119:115) E- “Even a child makes himself known by his acts” (Pro 20:11) F- “fear of the Lord is the beginning of knowledge; fools despise wisdom and instruction” (Pro 1:7) G- “God is love” (1 John 4:8) H- “Honor your father and your mother” (Exo 20:11) I-
Click to read more...

Ethics and Behavior in the Psalms

September 10, 2009
Adapted from John Richard Sampey, “Psalms, Book of,” The International Standard Bible Encyclopedia. http://www.studylight.org/enc/isb/view.cgi?number=T7141 Ethical Ideals Behavior Psa 1 contrasts the righteous and wicked Psa 15 describes “What Sort of Man, Then, Would the Psalms Acclaim as Good?” Psa 131 proclaims humility Psa 133 magnifies brotherly love Psa 24:4 “a compend of ethics in a single sentence.” Speech—see Psa 12; 52; 120 Ministering to the Needy Psa 82, justice Psa 41, kindness “The Ideal Ruler is both just and beneficent (Psalms 72:2,12-14).” Praying against the wicked “To be a good lover one must know how to hate.” Note: “We ought to study the psalms of imprecation in the light of their origin. They are poetry and not prose ... the psalmists pray with God's glory in view” (Ps 139:21). “We ought to use the imprecatory psalms in the light of our Lord's teaching. We cannot pronounce curses on our personal enemies.”
Click to read more...

President Plans to Talk to My Kids Tomorrow 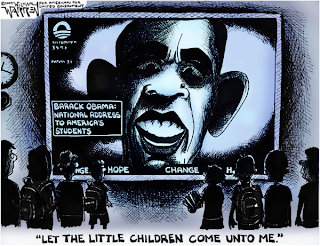 And yours, as well, fellow Christian. So, is this a sinister ploy to push his seemingly socialistic agenda?  Is he planning on brainwashing our kids against us in the anti-Christian or anti- good sense policies he promotes? Okay, let's cool off for a moment.  First, we are to honor those who have authority over us, even if we have strong disagreements with them (Rom 13:1-7; Titus 3:1; 1 Pet 2:17).  Keep in mind that Paul and Peter wrote under the rule of the Roman Empire, the same empire that promoted all sorts of godless activities, including murdering and persecuting people simply for naming the name of Christ.  Obama isn't quite that bad, so let us be measured in our response. Second, we need to ask ourselves about the example we set for our children.  This, of course, stems from our own commitment to Scripture's command to honor those in authority, and how it applies to this situation.  It is not that Barack Obama will be speaking to American schoolchildren tom
Click to read more...

September 07, 2009
In part one, we looked at the first nine minutes of this video.  We'll keep with roughly nine minutes again, stopping a few seconds before minute 18:00. It is very interesting that Anderson appeals to the historical evidence of the Bible as evidence for the reliability of the KJV in the face of the claims of Mormonism.  I agree, of course, that we can be certain that we have what God delivered ages ago based on the extant manuscripts.  However, a KJV-Only position of "We know its the Word of God because it is" does not hold up well against similar Mormon claims.  Indeed, Anderson understands that he must explain his rationale, show his homework, and explain that the Bible is reliable despite Mormon charges of corruption (while the facts demonstrate the contrary: the Book of Abraham, for instance, has been demonstrated to be a fraud ). Anderson links the reliability of the Bible to 2 Peter 1:16–21.  The link is surrounding the question of whether the Bible is as tru
Click to read more...

Out of the depths of the Psalms